Your baby has begun to roll over and now it’s time to transition out of your swaddle. It sounds like such an easy concept, right? Well, not for us!

With Parker, she NEVER took to a swaddle. She went from sleeping with nothing in our arms to a sleep sack. So, when it came to getting Rafe out of his swaddle, I just don’t think we thought the process all the way through. It had taken us so long to get him to like his Ollie swaddle, we should’ve assumed it would take some getting used to when switching to something new.

Many people recommend the Merlin Sleep Suit as a great transitional piece for babies. It’s a nice cushy sleep suit that is supposed to help keep your baby’s startle reflex to a minimum. Once we got it, we put him directly into it. The first sleep seems to go okay but it all went downhill after that. Unfortunately, it did not stem his startle reflex. I’m unsure if he was just strong enough or had long enough arms to power through the thickness of the suit or if I just overestimated the strength of the suit in stopping arm movements. We tried to keep this up for a few nights and naps, but it just wasn’t working at all. He would wake up within 10 minutes of putting him down because he would start sucking on his fingers. At this point, he really wasn’t taking a pacifier and he isn’t a thumb sucker.

So, we decided to backtrack a bit. We took away the sleep suit and put him back in a swaddle. The difference this time, was we kept one arm unswaddled. This worked GREAT for about 3 days and then he really started to fight to have his other arm free. We powered through anyways and he was still sleeping better than he had been in the Merlin Sleep Suit. We also started to realize that he would keep a paci in his mouth once he was asleep, so we would lay him down and hold a paci in his mouth for a minute.

When we moved him into his own room, we wanted him out of his swaddle and in a sleep sack. We actually never went back to the sleep suit, instead we chose to get a sleep sack to move to. I had heard a lot of really great things about one called a Kyte Sleep Bag. It came in different “togs”. According to their site, TOG is a rating system that measures warmth and calculates how quickly a fabric uses heat. This means that it is dependent on the temperature your house is at while they are sleeping. They have a 0.5, 1.0 and 2.5 tog. We went with the 1.0 TOG because we keep our house around 69 degrees, and he doesn’t like to be overly warm. It is a nice bamboo material and the weight of the sleep bag is reminiscent of a Merlin Sleep Suit but thinner. He took to it pretty much right away. We did research other sacks including, but not limited to, Nesting Bean, HALO and Burt’s Bees (which is what we used for Parker). I decided to try this due to the cushion semi-thickness of the Kyte Baby material. 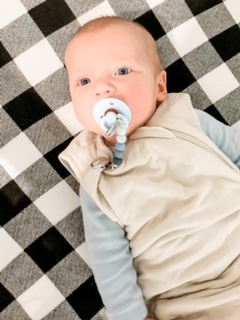 He absolutely LOVES this sleep bag!!! He always grabs in with one of his hands when he is falling asleep. I highly recommend it! I do also recommend the Burt’s Bees wearable blankets; they are what we used for Parker and loved them if you are looking for something a little cheaper and thin/stretchy.

Rafe now sleeps very comfortably in his Kyte Baby sleep bag, in his own crib. Stay tuned for how we got him in there!