So many things go into scheduling travel with a baby; booking, packing, flights, time zone changes, different surroundings. It can be a daunting experience to say the least! We thought we had Parker completely used to all of this…but everything changes every time we go.

We have taken Parker to California four times now, and each time has been a little bit different. Her first trip last year for Thanksgiving was definitely our smoothest trip. This was when Parker was still breastfeeding and was bounced down to sleep. Believe it or not, after being breastfed, she slept the entire first flight and majority of the second on our way out there. We were able to get her adjusted to the new time zone relatively easy and she slept great in the same room as us! Our next trip for Christmas was very similar. Her first day there was a bit much due to how many people greeted her when we got to the house, but she quickly adjusted, and everything went great! Then came the January trip… 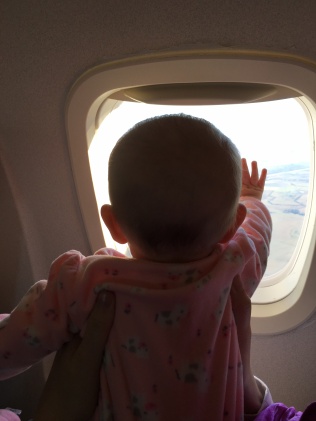 I took Parker myself this time…YIKES! I don’t know if it was that she missed her daddy, if she was going through a growth spurt or was having some separation anxiety in a new place (which is something she has never had, nor stranger danger), but she WOULD NOT SLEEP!!!! She woke up scream crying every 15-30 minutes after I’d laid her down. By day 4, I ended up co-sleeping her because it was the only way any of us got any sleep at all. It was terrible, she regressed to co-sleeping for naps as well. Safe to say we got next to nothing done that we wanted to while we were there. 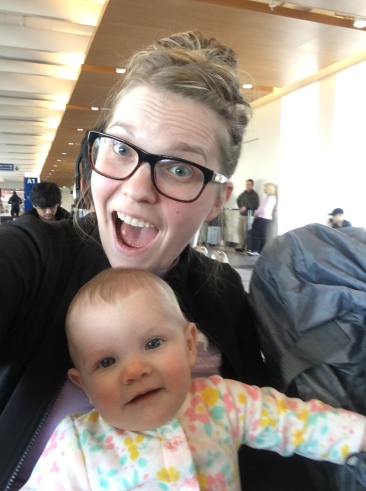 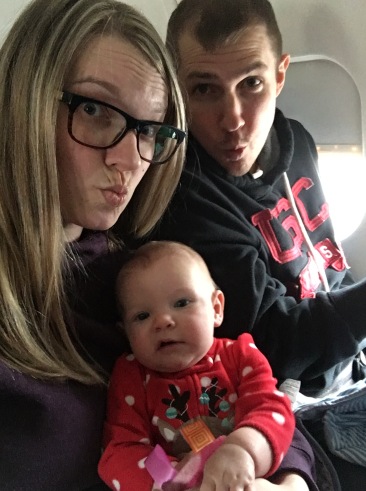 So, I’m not going to lie, I was a little nervous about this trip out there. The good news is that we had dad for the first week of the trip and she is now sleep trained…so no bouncing down every few hours! YAY! However, the downside of no longer being bounced down is that we had A LOT of trouble trying to get her to sleep on the planes. She fought us tooth and nail! On the way out there, she only took a single ONE HOUR nap. She was up the rest of the day until 6:30pm, luckily, she was in great spirits though! It took her a couple of days to adjust to the new time zone, but once she did everything went smoothly. I will say that the first night daddy was gone for business, we did have a moment where I thought we were going to have to re-sleep train her with cry it out…but her crying only last on and off for about 30 minutes and we didn’t have the same problem the next night, thank goodness! I was on the verge of making my husband commute 2 hours to and from every day for work, so he could be home at night, so everyone could sleep! Needless to say, he didn’t want to do that, HA!

We have learned some tips and tricks along the way though. This whole process has been very enlightening, and we are so glad that we started her off traveling early in life. This way she will be used to it until we move back to California and for all our vacations! 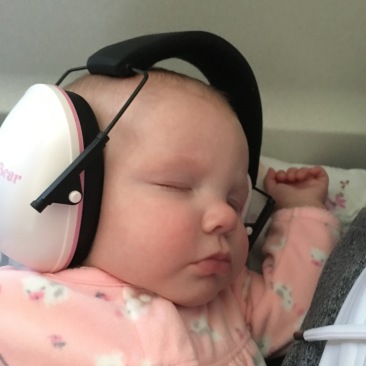 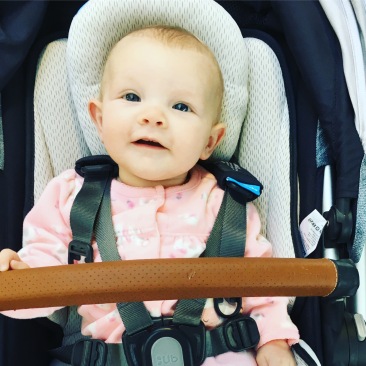 When she was younger we took everyone’s advice about making sure she was eating or sucking on something at take off and landing (breastfeeding is always SO fun on a plane). We were lucky the first few times she flew, she basically passed out while eating and stayed asleep most of the trip. We did try the noise cancelling headphones, NO GO! She HATED them…she screamed until we took them off. Turns out my daughter has her dad’s ears and not mine, they don’t seem to have pressure or popping issues. I will say though that we did like the ones we bought, I will link them below.

We’ve also learned that no matter how many toys you bring on the plane, your baby is going to want to play with anything and everything else; magazines, safety cards, tray tables, windows, seats, arm rests, bottles, cups…basically everything that is dirty ha! I highly recommend wiping EVERYTHING down the second you get in your seat! Even though it won’t complete sanitize it, it’s better than nothing because there is no stopping your little one from inevitably putting their mouths on all of it. Always make sure to have your child’s favorite lovey, binkie, or toy; it may be the only thing that they don’t throw on the ground. We learned that if/when she does start to lose it, having her tag blankie is KEY. I also highly believe in these Cutie Clips to attach said favorite item…this way if they do throw it, you don’t have to worry about it hitting the floor and getting dirty (or losing it walking through the airport). 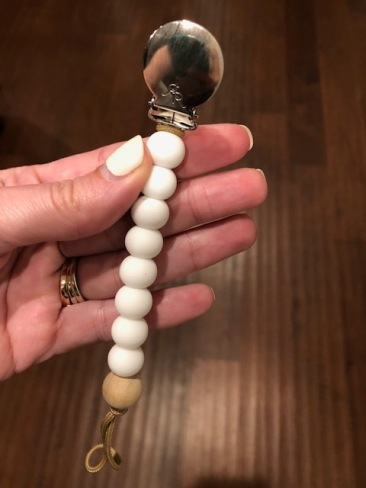 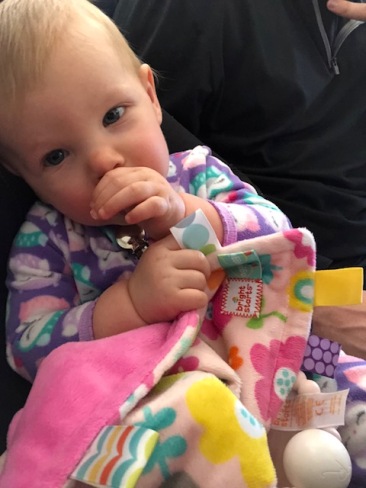 Know your routine!!! I can’t stress this enough! Pay attention to time zone changes, know when your baby last ate and when they are due to eat again. Try your best to set them up so they are feeding at takeoff, this way they are full for the beginning (if not all) of the flight…plus it helps with their ears. I always tried my hardest to have her eating at takeoff, lay over and landing. This way we could attempt to avoid her not wanting to go in her car seat back when she hated it because she was happy and full. Do you best to get them to nap, especially if you are changing time zones. Back when Parker was younger, we were able to get her to nap majority of the flights and then put her to bed early (and mom to bed early) when we got to California. It did cause some early mornings until we slowly adjusted her, but it is much better than trying to keep them up…I assure you, they will probably still wake up early! Another major lesson I learned…go to bed early with your baby!!! Like I said, there will be early mornings and this way it will be easier on you to get up as well. Also, I learned that it truly helped me adjust to the time change better. Before I had Parker, I would go to visit with the 3-hour time difference and I would be exhausted. I would have gotten up around 1am PST and stay up with everyone to visit until 10pm PST…this was awful. I enjoyed the time with family and friends…but man that next morning was ROUGH. I would almost feel like I was getting sick…so word to the wise, go to sleep with baby to help yourself adjust and be more present in the early hours. One extra tip…bring whatever your baby uses for his/her bedtime routine. We bring Parker’s sleep sack (obviously), her white noise machine and her Baby Shusher. I’m thinking about buying extras to have out there so we don’t have to worry about packing the sound machines, but it really helps her to have them. That way she knows it’s bedtime and we can follow her whole routine still! 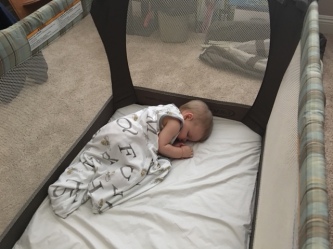 Next…Benadryl does nothing! Now every baby is different, and I truly don’t believe in giving baby meds for no reason. HOWEVER, in January I did travel with Parker by myself to California and decided to try Benadryl to help her sleep for me since I didn’t have anyone else there to help me bounce her down on the flight. Obviously, I’m sure Benadryl makes some babies sleepy, but not mine. It was pointless, and I hated that I gave her those meds for no reason. Lesson learned…either she sleeps, or she doesn’t, it is what it is.

Speaking of not sleeping…one of my biggest tips is not to pay attention to the other people. I mean, you definitely want to be kind and courteous, but you need to realize your baby will have at least one meltdown during your travels. There are a lot more people than you realize who understand and have been there…they are NOT judging you! They feel your pain and you don’t have to be sorry for something that you can’t control. However, there are also the people who get annoyed with a crying baby and who ARE judging you…IGNORE THESE PEOPLE!!! Either they don’t have kids in their lives or they are just a Grumpy Gus…regardless, you don’t need that added stress or negativity. Life happens, meltdowns happen…just take a deep breath and only focus on your baby. It will end, and you’ll move on, nothing last forever and it’ll be over before you know it! 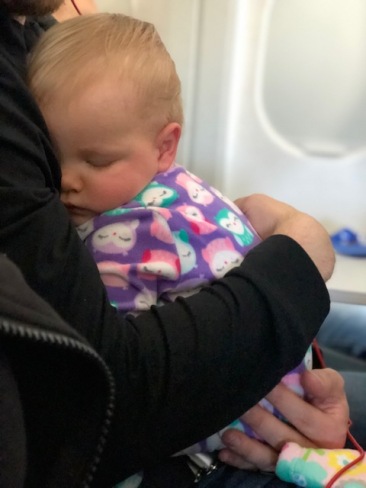 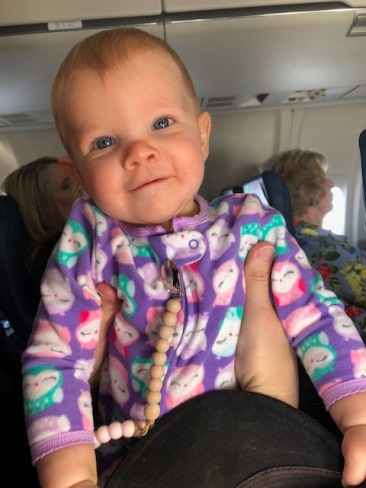 I could go on and on…but I’m going to stop here. These were the major points for me when it came to travel. Stay on routine as much as possible, adjust with your baby, ignore other people and be easy on yourself. Travel isn’t easy without a baby in tow, so it can be a bit chaotic. Just try to remember other mama’s (and daddy’s) go through it and you’ll be there before you know it!

***If you have any other questions for me about advice or tips with travel, please let me know!! I’m always here to help!***