I don’t know about all of you, but sometimes it makes us feel like bad parents…which YOU ARE NOT A BAD PARENT for laughing at your kids!!! Now, I am obviously not talking about when they are hurt or super sick…I’m talking about when you child is doing something they aren’t supposed to be doing or having a total meltdown over not getting their way.

Parker is going through this phase…I joke and say she is trying to make a liar out of me because I will easily tell you that she is the happiest baby I have every met. Even the doctors and nurses remark on it and tell me not to expect this with my next one! HAHA

Anywho…lately she has been teething. When it started with the bottom two teeth, you wouldn’t have even known she was teething. I didn’t realize it until one day I was putting on Orajel (I was using it because I knew they were coming) and I felt them already popped. Now that her top two have been coming through, she is definitely letting us know! She is still such a good baby….BUT…I swear she has turned into a three-nager at 10 months. She is sassy, whiny and all the things that we are not used to. She cries when it is time to get picked up from her toys (even if it’s feeding time), she used to do the sign for milk but now it’s like we can’t make her bottle fast enough before she loses her cool, she gets LEGIT alligator tears when story time is over and during her show time, if you pick her up before it is over she loses it. You used to be able to take away whatever toys you wanted, and it was no big deal…now she wants what she wants when she wants it. She wants to chew on whatever she wants, whether she’s allowed to have it or not! We try not to give in to it, but we definitely end up laughing about it (because what else can you do when you child is melting down but laugh, right?!).

I know she is just in pain and upset, so she wants what she wants. A good example would be the other day when she was holding my phone and ended up with a poopy diaper. Daddy picked her up and took away the phone…she TOTALLY melted down! We just could not…stop…laughing!! It obviously wasn’t funny, and she usually never has our phones because of this but we were just cracking up. Her facial expression clearing read “THIS IS NOT FUNNY…THIS IS SERIOUS”! And then we went to the grocery store another day and she was holding a Gatorade bottle…when the cashier went to take it in order to ring it up she got super upset in the middle of the store, cried all the way to the car and continued to cry as we drove away…and again, we just had to laugh about it. She had every toy under the sun in the car seat with her, but none of them were the bottle she wanted.

So, she has just become this whiny little booger and we are so not used to it! It’s just so comical to me because she knows we are laughing and is glaring at us for it! She’s also started to get into things that she isn’t supposed to. Now that she can crawl (we call it her ‘stanky leg’ crawl, I’ll post on my Instagram and Facebook stories so y’all can see what I mean) and pull herself up to stand, she is into anything she can get her hands on. She is also beginning to understand what the word “no” means. Our doctor told us that we don’t give babies enough credit at this young age, they DO understand what no means, just like they understand when you tell them to wave or clap. So, every time she is doing something she isn’t supposed to be doing, I tell her no. She then stops, looks at me…and then goes back to it when I turn away for a second! She totally knows! And it’s even funnier when I come to pull her away and she tries to run (crawl) away from me…while laughing! I have even tried to block her path with boxes and she just moves them, like mom please! I want to know when my 10-month-old because a 2-year-old. 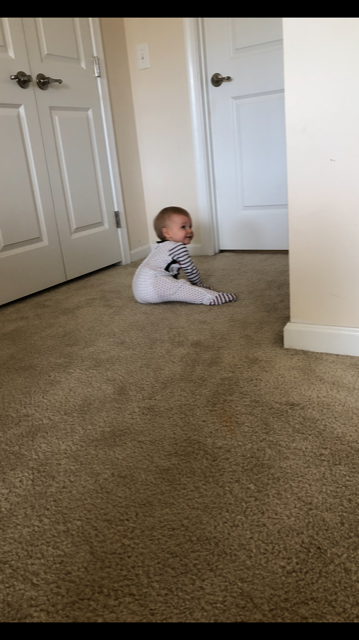 It’s just so funny to me how early they learn. All I want to do is crack up! However, I’ve seen it so many times, when you laugh when your kid does something bad and they see you laughing; they end up thinking it’s funny instead of wrong. I know this is going to be something my husband and I really have to work on. It’s so hard not to laugh! Sometimes there is just no stopping the giggles. There are just those moments when you have to laugh because what else can you do?! You’ve told them no how many times?! Do you really get that mad or do you just say, she’s only little once? Obviously keep telling her no so she learns…but there is only so much you can do.

My husband and I have wondered if us laughing makes us bad parents…but NO, this does not make you a bad parent! They aren’t hurt, they aren’t sick…she’s upset because we aren’t spoiling her. We want to teach her that early, that you don’t always get what you want. We’ve learned though that we are really going to have to work on controlling ourselves with the laughing. When she gets older we’ll do this too and if she sees that what I’m doing is funny to mom and dad, she won’t understand that she’s in trouble. We have to wait till later and laugh behind closed doors…which we will probably fail at from time to time. Sometimes you just think “YUP THAT’S MY KID”.

If any of you out there are laughing at your children when they throw tantrums or do something wrong that is just too funny…you are NOT a bad parent!! You are not alone…trust me, every parent out there goes through this! THE STRUGGLE IS REAL! And sometimes, all you can do is giggle…because laughter is the best medicine!